The cause of your tinnitus, or ringing in the ears, can be hard to determine, but knowing it can help determine the best treatment plan. Find out about potential causes of tinnitus and how you can relief. 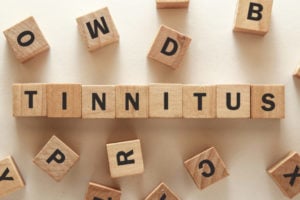 Tinnitus, also called ringing in the ears, is a perception of persistent sound in one or both ears when there is no sound present in the environment. Tinnitus is different for each person, ranging from a quiet background hum to a roar that can interfere with daily activity and make it challenging to hear a conversation.

Common causes of Tinnitus
There are habits and common health issues, such as hearing loss, that can contribute to tinnitus.

Presbycusis
Hearing loss due to aging is called presbycusis, and it often starts around the age of 60. This gradual loss of hearing as the inner ear deteriorates can cause tinnitus as well.

Loud noise exposure
Being exposed to loud noise on a regular basis from heavy equipment, chain saws or firearms are common causes of hearing loss and tinnitus. Noise-induced hearing loss and tinnitus can also be caused by listening to loud music through headphones or attending loud concerts frequently. It is possible to experience short-term tinnitus after seeing a concert, but long-term exposure will cause permanent damage.

Unhealthy habits
Researchers are not entirely certain why, but drinking alcohol, smoking cigarettes, eating certain foods and consuming caffeinated beverages can play a role in tinnitus. Frequently being fatigued or stressed can also be a factor. In short, if you’re not taking good care of your overall health, you are susceptible to tinnitus.

Common Ailments
Anemia, allergies, impacted earwax, diabetes and an underactive thyroid gland (hypothyroidism) are all common medical conditions that can be associated with tinnitus.

Other possible causes
Tinnitus can be caused by a variety of less common underlying conditions or injuries. If you have tinnitus, start your treatment path by seeking out a hearing healthcare professional who specializes in tinnitus diagnostics so they can help identify the underlying cause. If the common causes for tinnitus are ruled out, the practitioner will refer you to another specialist for further evaluation. Listed below are related medical specialties who might be able to help you determine the cause of your tinnitus.

Otolaryngology
An otolaryngologist, or ear, nose, and throat (ENT) physician, specializes in disorders of the ear. You may be referred to this type of physician if your hearing care practitioner suspects you have otosclerosis, Meniere’s disease or impacted earwax.

Neurology
Neurologic injury, such as whiplash or head trauma can cause damage to the delicate inner ear structure, which may lead to tinnitus. Neurologic diseases like multiple sclerosis can result in tinnitus, and tumors on the auditory or vestibular nerve can create tinnitus by pressing on the neural connections.

Cardiology
If your tinnitus resembles a pumping, beating or pulsating sound, it could be caused by damage to your blood vessels. Hearing care professionals and physicians refer to this type of tinnitus as pulsatile tinnitus. Some common underlying cardiac causes of tinnitus include the following.

High blood pressure: Also called hypertension, tinnitus caused by high blood pressure can be exacerbated by caffeinated beverages, stress or alcohol.
Turbulent blood flow: This condition is caused by a kinking or narrowing of the neck artery or vein. When the blood isn’t flowing properly, you can perceive tinnitus.
Cardiovascular disease: Cardiovascular disease and poor circulation can cause tinnitus because the blood flow to the inner ear is reduced or cut off.
Arteriovenous malformation (AVM): This malformation of the capillaries can result in tinnitus that only occurs in one ear.

Pharmacy
Medications you are taking may have side effects of a ringing or buzzing sensation in the ear. Some patients who already experience tinnitus may suffer from worsening symptoms after taking some medications. After discontinuing the drugs, symptoms typically disappear or improve.

Did you know? One of the most common drugs known to cause tinnitus is aspirin, especially when taken in high doses.

Antibiotics, including erythromycin, neomycin, polymyxin B and vancomycin, as well as cancer medications, including mechlorethamine and vincristine, and water pills, including bumetanide, furosemide or ethacrynic acid all have the ability to cause or worsen tinnitus. Some patients will experience tinnitus after using antidepressants or quinine medications.

Seek help for your tinnitus
If you’re not sure of what is causing your tinnitus, a hearing care professional can help pinpoint the issue through a series of tests. It can be helpful to take notes of the sounds you are regularly or irregularly experience to help your hearing healthcare professional put together the clues to what may be causing it. Be sure to alert your practitioner of any pertinent medical history, medications or excessive noise exposure that could be playing a role in your tinnitus.