Dr. Susan Terry was interviewed for an article in Healthy Hearing.

When used correctly, firearms provide security, livelihood, and recreation for millions of Americans. The National Rifle Association boasts more than five million members and according to the National Shooting Federation, 20 million people spend $16.9 billion annually on target shooting, a sport which supports more than 329,000 jobs. 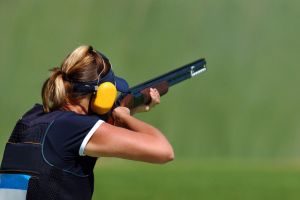 While owning a gun can be fun and rewarding, it’s important to practice safe firearm habits—including those that relate to your hearing health.

“Gunfire is about the worst thing you can do to your unprotected ears,” said Susan E. Terry, Au.D, an audiologist and owner of Broadwater Hearing Care in St. Petersburg, Florida. “Gunfire is impact noise and is more of an assault on your ears than a constant noise would be. Anytime you’ve got impact noise, you’re going to have issues.”

Ears ringing from a gunshot?

Here’s why: A gunshot produces a loud burst of sound, causing a concussive energy that rattles the eardrum, the little bones in the inner ear and the cochlea, a fluid-filled, snail-shaped organ with thousands of tiny hair-like structures that convert sounds from the outside world into electrical impulses the brain can understand.

“You may notice your ears feel stopped up when you’re done shooting and you can’t hear as well as you could before you began. That’s called a temporary threshold shift,” Terry explained. “The more you subject your ears to noises like gunshots, the more likely that temporary change is going to become permanent.”

While most noise-induced hearing loss results from continuous exposure to loud sounds, even a single gunshot blast can cause permanent damage. Terry said everyone within earshot of gunfire should make it a habit to wear hearing protection.

“A single blast can cause lasting hearing loss and tinnitus,” she said. “Once the damage is done, there’s no taking it back.”

The National Institute on Deafness and Other Communication Disorders (NIDCD) says hearing damage occurs with noises of 85 dB or louder. Higher caliber guns produce a louder sound than their small caliber cousins; however, any shot fired next to an unprotected ear can be damaging. According to USA Carry, a .32 LONG fires a 152.4 decibel (dB) blast while a .44 S&W Magnum blast registers 164.5 dB.

What is shooter’s ear?

It’s obvious when a patient has been involved with firearms, whether as a hobbyist or member of the armed forces, Terry said, because they have the classic hearing loss pattern known as “shooter’s ear.”

“You can look at someone’s hearing who has been shooting for years and tell from their hearing loss which ear they hold a gun up to,” she said, explaining that the shooting arm shoulder helps shield the blast from hitting the ear full force, causing more damage to hearing on the opposite side.

How to prevent hearing damage from gunfire

The good news? Most noise-induced hearing loss is preventable. Terry urges parents to stress the importance of wearing hearing protection in noisy environments with their children and act as a role model by wearing it themselves.

“We live in a really noisy world and good hygiene is important,” Terry said. “Just like you would wear vision protection (when shooting), you should wear hearing protection, too. It makes a difference and prevents hearing loss so it’s a good idea to get it started off right in the first place. If you can prevent hearing loss, it’s much better than having to deal with hearing loss later on.”

Every sport has its own protective gear and shooting is no exception. In this sport, the type of hearing protection you wear depends upon the environment.

Range shooting: Because gunfire happens at a rapid and continuous pace in this setting and usually indoors where sound is more concentrated, Terry recommends wearing a pair of earmuffs over foam ear plugs to provide the best protection against hearing loss. Specialty earmuffs can be found online or at your local sporting good store; foam ear plugs can be purchased inexpensively at the drugstore. A comfortable fit is important so you don’t feel compelled to take them off.

Competitive skeet: In this outdoor setting, shooters are constantly looking around searching for their target, which may not be conducive to wearing ear muffs. Instead, Terry recommends skeet shooters invest in a pair of custom molded ear plugs which block all sound from the rapid fire. Your audiologist may provide this service or recommend a reliable source

Hunting: Since it’s important to hear what’s going on around you when you’re hunting, it isn’t a good idea to wear ear protection that blocks all sound. For this activity, Terry suggests hunters wear specialty electronic hearing protection which suppresses the gunfire when the trigger is pulled. These devices can be found online or in your local sporting goods store.

The key to prevention, Terry advises, is to be aware of how loud your environment is and wear hearing protection when sound levels are dangerous.

“The best advice I can give is to be safe—and part of being safe is protecting your hearing,” she said. “Most people think ‘it’s not that loud,’ but people don’t have a concept for what is loud and what is too loud. Consider adding a sound level meter app to your smartphone. It will tell you how loud an environment is so when you encounter an environment that’s louder than you thought, you can wear hearing protection.”

Hobbies are important to good quality of life and so is healthy hearing. Regardless of how noisy your hobbies are, make your hearing health a priority by protecting your ears in noisy environments and scheduling annual hearing evaluations. Visit Healthy Hearing’s directory of verified consumer-reviewed clinics to find a qualified hearing healthcare professional in your community.